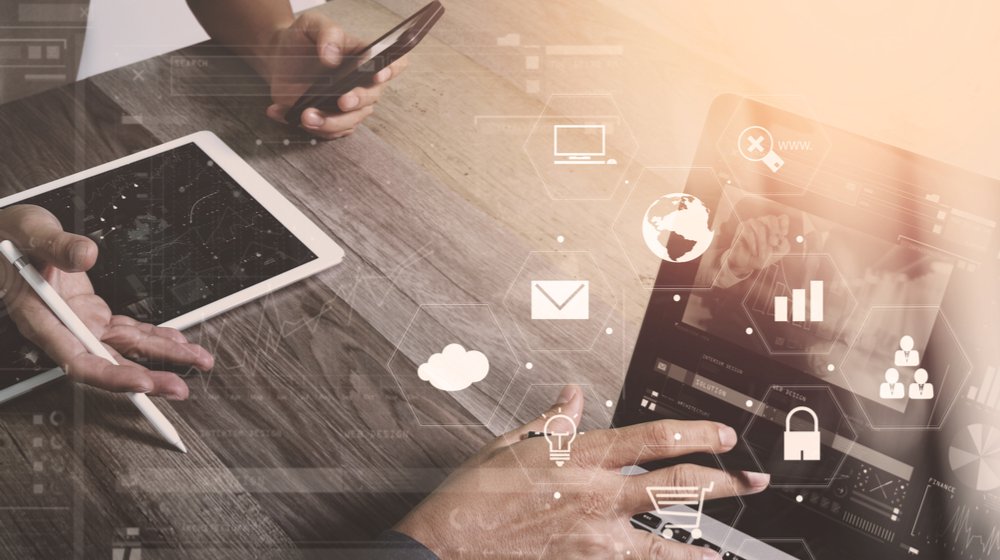 We all want to make our content go farther. No matter how many followers you have on social media and no matter how many people visit your website every month, sometimes your great content just doesn’t get as much mileage as it could.

Your most loyal readers will read your content, of course, and while feeding your existing audience great content is important, that audience remains limited. There’s a much larger audience who has yet to even hear about you, or the awesome stuff you’re writing.

So if your goals include giving your content a second life, and continuing to grow your audience, Medium can definitely help you.

What’s Medium all about?

Evan Williams and Biz Stone founded the popular blogging platform Medium back in 2012. It touts itself as the place where “everyone has a story to share, and the best ones are delivered right to you.”

I’ve been publishing on Medium for just over a year now and have discovered many great benefits.

Reasons You Should Publish on Medium

If you haven’t yet taken the leap, here are 10 insanely good reasons you should syndicate your content on Medium.

1. Medium Has A Great Import Tool

If you have blog content anywhere on the web, Medium can import it. All you have to do is click on the “Import a story” option.

After you’ve imported it, you can edit it however you want. Change your title, move around the images, and play with the formatting until you’re ready to hit publish.

Medium even adds a line at the bottom of your imported post that says where and when the post was originally published, including a link to the original. 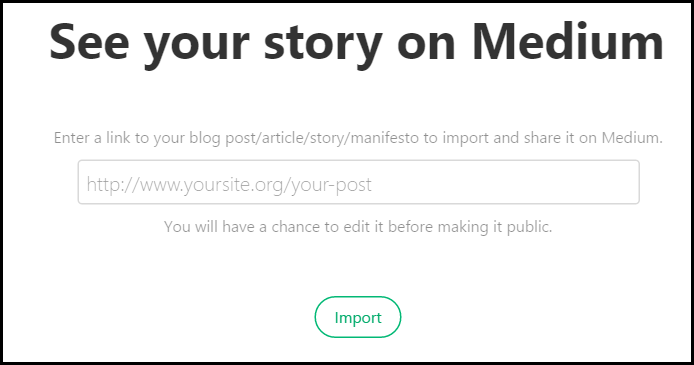 2. You Can Take Your Audience With You

If you’ve already built up a good-sized social media following, there’s good news: yes, you can take your audience with you to Medium. So you basically have a built-in audience with no effort on your part.

You can link your Medium profile to your Twitter and Facebook IDs – Medium will then figure out which of those users are also on Medium, and connect you with those people automatically.

The average reading time is pretty amazing, usually between 7 and 11 minutes.

Engagement on Medium is much better than on Twitter. You could get millions of impressions on Twitter, but only 50 actual clicks on your content. That’s because users are spending all of 2 seconds on your tweet before all the other new tweets start flying by.

Medium’s algorithmic timeline will open your content to a different audience that otherwise never would have heard of you. Essentially, Medium helps create a new audience for you, regardless of whether you already have a big audience (and your audience could always be bigger, right?).

The key is getting people to recommend your posts. On Medium, it’s all about hearts.

As you can see here, based on an analysis of several hundred posts, I’ve calculated that the more people who click on the heart icon posts, the more likely it becomes that you’ll show up in other people’s timelines, including those people who don’t yet know you.

If you can get 200 hearts within 24 hours, you will likely end up being one of the top stories of the day – a Medium unicorn. Those top stories get featured prominently on the website and in the app.

In addition, Medium sends out a personalized email digest to users, in which they share two or three of the top stories for you.

5. You Could Get Discovered By Big Publishers

Many large publishers no longer accept applications from authors because they’re tired of being inundated with terrible pitches. Sadly, it’s turned into a “Don’t call us, we’ll call you” situation.

However, publishers are still finding and adding new contributors to their sites. How? By scouting for popular authors on Medium. 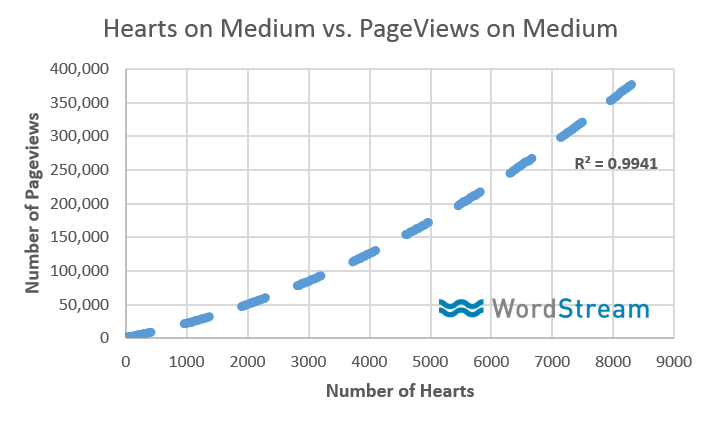 As long as you’re consistently publishing great posts, and you have talent and creativity, eventually you’ll hit a home run. Maybe, just maybe, a Business Insider, Huffington Post, or New York Observer might ask to syndicate one of your posts – or even ask you to become a regular contributor.

Medium has no API. Although APIs are essential in some ways, they also sometimes ruin social networks. Probably 99.9% of spam (like fake followers and people scheduling and tweeting garbage content) is due to aggressive API usage.

Unlike on Twitter (which is ridiculously noisy), the signal to noise ratio on Medium is pretty good. Way more of my 52,000 medium followers seem legit compared to your average Twitter “followers”, and the lack of noise has, in part, helped me become one of Medium’s top authors.

Medium won’t be right for everybody. However, certain industries have really great, established audiences.

Topics that do really well on Medium include:

Marketing posts do OK, provided that you’re not overly tactical.

One thing I do is put an “About the Author” footer in all my articles, which includes links to all my social profiles, as well as a link to my company website.

Medium is actually the number-one driver of traffic to my Facebook Page.

9. You Can Run Your Own Publication

Another great way to gain exposure is by starting your own Medium publication – so even if people aren’t following you individually, but they start following your publication, it’s highly likely they’ll start being exposed to your content anyway.

I started a publication called Marketing & Entrepreneurship which features tips and news on social media marketing, online advertising, search engine optimization, content marketing, growth hacking, branding, and more. It has over 10,000 followers as of this writing.

Quite a few brands have actually given up on traditional blogs and now just publish on Medium.

This is crazy. Look at these stats – all just from syndicating columns I’ve already written and published. Nothing new or original required.

Hopefully this helps you understand the awesome power of publishing and syndicating content on Medium – especially for your personal brand. You can gain an impressive amount of traction by republishing your existing content with minimal effort.

Bottom line: There’s a lot for you to like about Medium. So what are you waiting for?